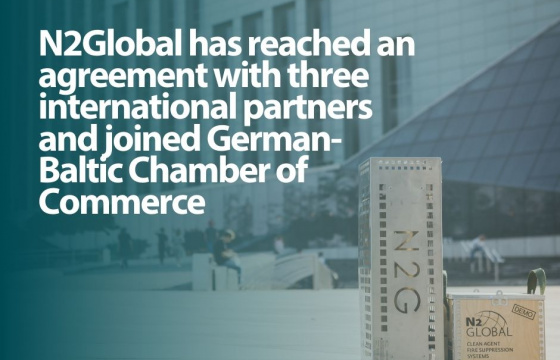 Since December 2020 N2Global Ltd. has started partnership with SafeVent (Denmark), Equipro (United Kingdom) and CEDETAŞ (Turkey). As the CEO of the company explains this is an important step towards the company's plans in the global market.

The new partners are from various fields related to fire safety. SafeVent is a company based in Denmark specializing in prevention, containment and handling of explosions and fires for more than a century, while CEDETAŞ are experienced experts from Turkey who are focused on automation, fire safety, security and project engineering since 1977, but Equipro is a world class fire protection solution supplier from United Kingdom. These are new additions to already existing partnership with K&G Groep who are experts from The Netherlands focusing on designing a specific fire safety solutions and the world’s second largest security group – Securitas.

“This will be an exciting challenge for us and our technology, which is new and unique even on a global scale. We have no doubt that with the involvement of our partners we will be able to both explain our technology and convince international customers of its effectiveness. We are committed to expand our network in the near future by facilitating the entry of N2G generators into the global market,” explains Mikelis Lapse, the CEO of N2Global.

In addition, N2Global has also joined the German-Baltic Chamber of Commerce, which will open up wider opportunities for cooperation and development in the German market.